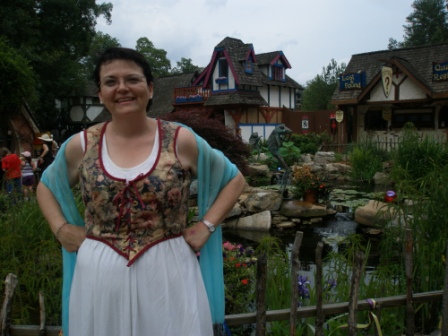 I Came To Live Out Loud is a quote from Emile Zola that I’ve always loved. My best friend sent me a postcard with that on it, and for years I kept it over my desk, but didn’t always live by it. Most people who know me probably consider me as outspoken. I’m usually not afraid to say what I think, particularly at work. But I don’t think that’s what M. Zola had in mind. I think that there are periods in my life when I traveled and got out of myself and into the world and those are what are important. They are the times you remember.

High School is probably when living really started. I had a job and I bought a car: $350 for a 1960 Ford Mercury Comet which could easily sleep 6. And I know this because there was this one camping trip where it poured and…more about that sometime! But suddenly I got to be in the band (tall flag!) and competition color guard and the senior play and working on the homecoming floats. My senior year, I raised money and went to Washington, DC for Close-Up – my first time on a plane!

Yale Talk about explosions! Imagine the culture shock: going from the dead end of a dirt road outside of Villa Rica, Georgia to New Haven, Connecticut and YALE. My life just EXPLODED (in a good way). I was exposed to people and ideas and art and culture. About the second semester I was so overloaded,  I actually stopped sleeping, except for naps. I had insomnia, so I would let myself into the Film Study center at night and watch movies all night. The only movies I’d ever seen were Elvis Presley movies that my mom liked and whatever made it to the $1 theater in Villa Rica (think Star Wars, Smokey and the Bandit…). I had missed an entire life of movies from Hitchcock and Capra and DeMille and boy did I make up for it. I could squeeze in three or four movies a night, go back to my room for a nap and shower and then off to my morning shift, then classes.

Traveling Towards the end of my sophomore year, I found out that my scholarship could cover a year abroad if I was an international studies major. Since English was the only foreign language I spoke (Southern American is my mother tongue) I went to talk to the head of the department. I was so fortunate that it was someone I’d encountered on another one of my part time jobs as a bartender. He remembered my face, thought my passionate plea about never having been anywhere was a good reason to let me into the department. I had a lot of catch up, but that semester of living in London was the beginning of a love affair with foreign travel.

Africa, Asia and India Unlike a lot of obese people, I never just stayed at home and hid out. In the last 20 years, I’ve taken jobs anytime I could that would get me out of the country and onto a plane. I’ve sold possessions, ran up credit cards and borrowed money to travel. Even when I weighed over 300 pounds, I still squeezed myself into a seat and went to live in England and travel to Africa and India when I worked at Coke.  I worked for InterContinental Hotels for three years and went to Dubai, Singapore, London and all over the US. I survived the disbelief and disgust that foreigners have for obese Americans by just ignoring it and moving ahead and doing my best to correct the impression my body made, with the insight and intelligence that was hidden by all that.

Then there were the other times. The months or years that would go by when I got up and went to work and came home and went to bed. Day after day of endless monotony. Days I spent stuffing my face and sitting on my butt with a book or television remote in my hand. Those were the times when my weight would creep up, up and up until I wasn’t able to move or ended up with something terrifying that would get me moving or eating right again.

I’m living out loud now. In the last year, I have started to fit so much into my everyday life. I’m not waiting for the big trip to Singapore or a vacation in London. I’m going to New York for the weekend and the Ren Fest for a day. I’m going to the movies with my husband and the park or pool with my son. Starting today, I’m going to be posting pictures whenever I do something that is living out loud.  Here’s one from the Ren Fest and the road trip to New York to get started. 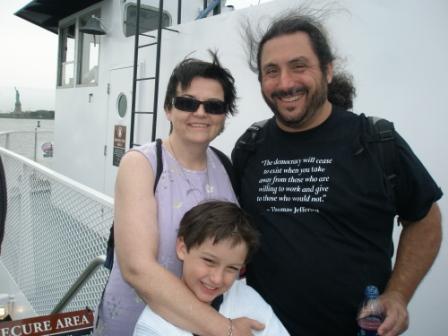 2 thoughts on “I Came To Live Out Loud”