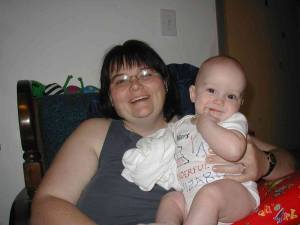 There were many years, decades really, when not only did I never think I’d be a mother, but I absolutely did not want to be one. From a distance of thirty years, I know that was because I’d spent too many years of my childhood doing the things that a mom has to do: cooking and cleaning and laundry and dishes and changing diapers and babysitting. My mom, with 5 children before she was 30 – needed all our help. I get that. But it soured me on wanting my own family, my own babies.

In college I got a few jobs as a nanny/babysitter and I was good at it, but still, not what I wanted. Years passed and I loved it when my sister had a son and I got to play doting aunt. I made every excuse to go visit them where ever they lived and to bring toys and books and spend time with that beautiful little boy. Nieces and nephews followed – eventually there would be 9 or 10, including steps.

I remember when I started wanting my own. It was when I met and fell in love with a man who I knew would be a great father. Someone who would be there with me, every step of the way to parent with me. I started to realize that it wasn’t revulsion that kept me from wanting to be a mom, but fear. Fear that I would be the kind of mother I’d had. What I didn’t admit to myself is that my mom had turned 16 the month before I was born. She had no age, wisdom or maturity or even good examples of parenting to guide her. By 18 she had three kids under 3 and it was survival mom at best. (And yes, she knew about birth control and yes, she was trying but she was the original Fertile Myrtle, apparently!)

My situation was so different. I’d lived a pretty amazing life already – I was in my mid-thirties when I met my husband. I was college educated and (seemingly) wiser and more mature. At the very least, a lot more patient than I would have been at 16.

After decades of trying really hard not to get pregnant, I learned that I couldn’t get pregnant. Seriously? That’s a lot of freaking money and anxiety to have wasted, darn it. Anyway, so we tried and tried and finally got pregnant. So much joy and excitement but so very short lived. At 13 weeks we found out the baby had died and I had to have a D&C. It’s been fourteen years and that still makes me tear up. I think I cried for a month without stopping. October 2000. Some years I’ll realize what day it is and stop and think about what it would have been like if that baby, a boy, had lived. My mother-in-law told me maybe it was for the best and we should consider it a blessing. That was such a terrible thing to say because he didn’t live, but in a way it was a blessing and now I can’t wish that he had, because it would have changed everything that makes my life what it is today.

In March of 2001 my best friend had twins. I went to stay with them for ten days. So hard. I remember hiding in the bathroom or going for walks and just wailing. It hurt so much to be there, to hold those babies and know mine had died and I would never get to hold him. But it was also a healing time. Holding one or two babies constantly for 10 days is apparently an amazing treatment for infertility because I realized I was pregnant a month after I went home.

It was terrifying this time, not joyful. We were so scared that the baby might die again. People cautioned me not to tell everyone this time. Not to buy stuff for the baby. instead, I went out and bought a little winter outfit (he was due in February) and started making a blanket. I wasn’t going to wait until he was born to love him. He deserved for me to take that risk every minute of the pregnancy. And so I got another baby. Another chance to be a mom.

I’m not the kind of mom that I hoped I’d be. I’m not calm and organized and all Martha-Stewartish. I yell and get mad and I’m way too critical. I forget to do dishes or make something for dinner and sometimes I say mean or stupid things that make my son cry. I’m always sorry, because what I really should be saying, all the time, is how much I love him. How much I love being a mom and how I wouldn’t change a single thing, even if I had a time machine and could go back and save that first baby. It sounds hard, but that was my “housecleaning” pregnancy that made it possible for my son to be born, strong and healthy and exactly who he is.

I love you. Thank you for choosing me to be your mommy.

One thought on “Tough Mother”